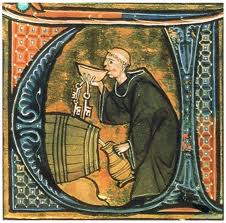 The word alphabetum, which is well attested in classical Latin, is found in British medieval Latin from the sixth century and again in Bede (DMLBS 1,69b). It appears, however, that the vernacular languages in use in England in the Middle Ages (English and Anglo-Norman) did not incorporate it, but prefered either ABC, or words derived from that.

David Crystal’s Story of English in 100 Words (London: Profile Books, 2011) notes that the word alphabet does not occur in English until the sixteenth century. Hardly surprising in some ways, one might think, since the word is derived from the first two letters of the Greek alphabet (alpha, beta), and Greek was not much studied in England before the Renaissance.

But the situation is not quite that simple. Firstly, the word alphabet is in fact found in English rather earlier than Crystal claims: both the OED and the MED provide a first attestation from an anonymous translation of Ranulf Higden’s Polychronicon, which dates from 1425 (OED alphabet and MED alphabete):


'Y have be instructe in Latyn and Grewe, but y perceyvede not the a. b. c. or alphabete of that chorle'.
('I have been instructed in Latin and Greek, but I did not understand the ABC or alphabet of that person')

The word is obviously still used in a Latin/Greek context, translates a Latin original, and appears as a synonym to a.b.c.

While the Anglo-Norman Dictionary has not found any attestations of alphabet, the word already appears nearly a century earlier in Continental French, with the authoritative Trésor de la langue française supplying a quotation from 1395 in Jean d'Outremeuse's Ly Myreur des Histors (TLF alphabet):

It is interesting to note that here too, the medieval author felt the need to clarify the word by its synonym ABC.

Alongside the “learned” and later word alphabet, the languages of medieval England had from a much earlier date the alternative ABC, derived this time not from Greek letters, but from those that make up the Latin alphabet. ABC as a noun, or the spelt-out version of it, abece, is listed in the dictionaries of English from the first half of the fourteenth century (with the earliest attestation in Robert of Gloucester, 1325; OED: ABC):

Dictionaries of medieval French suggest that the word was known in the thirteenth century (GdfC 8,87a; TL 1,43), but the earliest French usage appears in Anglo-Norman (see Trésor de la langue française A B C, and the Anglo-Norman Dictionary ABC), in an alphabetical verse lapidary (a treatise explaining the virtues of particular stones). It is a text dating from 1100-1130. Its author, Philippe de Thaon, was originally from Normandy, but he wrote his lapidary in England.


'Or finent les peres de 'T', Ensurquetut nostre ABC'
('Here we end [our discussion of] the stones beginning with the letter 'T', and thus our ABC')

In addition, Anglo-Norman also has attestations of the spelt-out form abecé, of which the earliest example listed in the Anglo-Norman Dictionary is taken from the Life of St Edward The Confessor (c.1170), written by  a nun of Barking (AND abecé):

A third alternative found in Anglo-Norman is the word 'absidarie' - or a variant spelling of the Middle English abecedary / medieval Latin abecedarium (DMLBS 1,3c). In the English language, the word's primary meaning is 'a book for teaching the alphabet' - with its earliest attestation listed in the OED and MED once more taken from the anonymous translation of Ranulf Higden’s Polychronicon (1425):

It is only in the late sixteenth century that the word becomes used in English to refer the the alphabet itself. 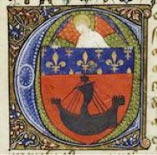 The Anglo-Norman Dictionary provides one example of the word, which is dated earlier, to the first half of the fifteenth century. It is found in the Liber Donati, a treatise on French grammar :

So rather than alphabet, it was the word ABC, the name often still given to children’s reading-books and guides of all sorts, that was current 900 years ago in Anglo-Norman England.