Word of the Month: Penthouse

By Anglo-Norman Dictionary April 28, 2015
Some Modern English words have a linguistic history that is straightforward to follow: formally, they have a transparent etymology, and semantically, they have a sense that has more or less remained the same throughout the centuries. Many words, though, take unexpected turns: some revert to very different spellings, twist their forms, and/or acquire new connotations or even meanings. The result is that for such words the root, or etymon, may turn up in quite unexpected places. One clear example of the latter – of a word ‘hiding’ its etymological and semantic origin – turned up during the current revision of AND of words beginning with P-: penthouse.

The Modern English word penthouse is defined in the OED (third edition, updated in 2005) as ‘a flat, apartment, suite of rooms, etc., occupying the top floor or floors of a tall building’, with the addition that the word usually has ‘connotations of wealth, status, etc., typically suggesting a luxuriously appointed apartment offering expansive views’. As they state, that sense is originally American, attested from the late nineteenth century, but has been taken over (and has become common) also in British English and beyond. 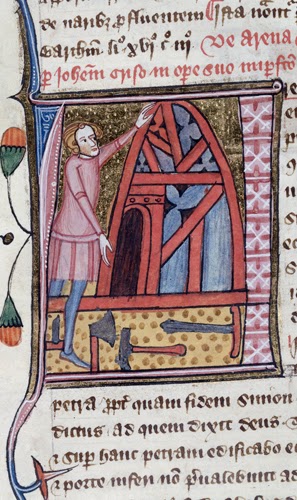 Although the word looks very English, it is not. As it turns out, its origin has nothing to do with the word house, but can be traced back to the Anglo-Norman word pentis (defined in AND#1 as ‘pentice’ and ‘small building’). This word, pentis, is an aphetic form (i.e. a word that loses its prefix, a process which is not uncommon in Anglo-Norman) of apentiz (also listed, separately, in the AND as ‘penthouse’ or ‘outbuilding’).

The word apentiz derives from the Latin verb appendere, (‘to hang on, be attached to’, DMLBS 105b), and more specifically from the related adjective appendicius (‘attached, adjoining’, DMLBS 105b). That, in turn, produced the noun, attested in twelfth-century Latin texts, with the sense ‘attached building, lean-to, penthouse’, DMLBS 105b). The equally related appendix is also found in Medieval Latin, slightly later, but with that very same sense of ‘penthouse’ (DMLBS 105c).[1]
From the early thirteenth century (the earliest attestation is from 1211), the aphetic form is also found in Medieval Latin from British sources as penticium/pendicium, specifically with the sense ‘structure appended to a wall of a building’ (DMLBS 2183b). The coincidental dating of the earliest Latin and Anglo-Norman attestations leaves it unclear whether this was an independent process in Latin, or (as was frequently the case) whether the medieval Latin word was influenced by the vernacular.

In Continental French, the word appears as appendis, appentis, appentise, and is defined in the DMF as ‘Construction sommaire, avec un toit en pente d'un seul côté, qui prend appui sur une maison plus importante’. The FEW, under appendere (25/i,33a-b) confirms that these forms and senses appear in Romance languages from the twelfth century, and adds variants and/or derivatives like arpentif, appendige and appension. Interestingly, no aphetic forms are listed, which suggested that these were indicative of an exclusively Anglo-Norman phenomenon.[2] 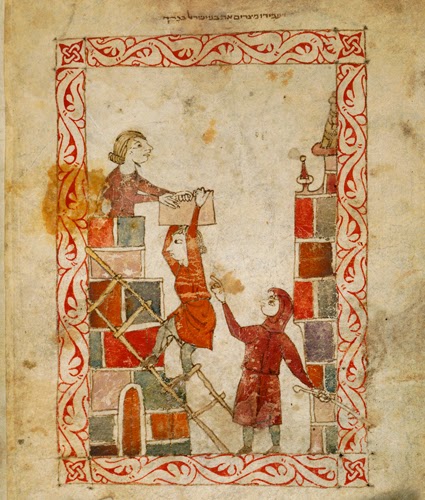 English originally borrowed the word, presumably from Anglo-Norman but possibly with some influence of medieval Latin as well, as pentis – the aphetic form. Although the MED lists attestations as early as 1232,[3] the earliest unequivocally English uses date from 1400. Subsequently, in the fifteenth century the word seem to become more common, with variant spellings such as pendise, penteis, pentace, pentesse or peintiz. The OED suggests that the shift to ‘penthouse’ happened at a later stage, in post-medieval times: through  a process of folk etymology (or re-analysis of the meaning of a word through popular but historically incorrect interpretation of its origin) the word was now understood as a compound of pent (French pente for ‘slope’) and the English word house, probably because it was used with reference to a small house or annex with a sloped roof – which, as the dictionaries suggest, was one of the interpretations of what a medieval pentis could be.[4]
The earliest attestation of this English re-interpreted form (pent + house) in the OED dates from 1530, in John Palgrave’s L’Esclarcissement de la langue francoise, where he defines the French word appentis as ‘Penthouse of a house’ (253/1). There is, however, a clear indication that the development must be much earlier than that, found, somewhat surprisingly, in an Anglo-Norman text of 1371-75.
nostre dit seignur ad baillez […] al dit Thomas toute sa pescherie deinz l’eawe de Severne, ovesque pentthous et touz autres appurtinances           - GAUNT#1 i 9.
(‘our said lord has entrusted the said Thomas with all his fishing grounds in the river Severn [...] together with ‘penthouses’ and all other purtenances’)
The word hous is not Anglo-Norman,[5] so even though the context is Anglo-Norman, this example must be considered an instance of code-switching, where the Anglo-Norman matrix-language text reverts to a Middle English word. This particular word has clearly been subjected to the aforementioned specifically English folk-etymology, more than 150 years before it can be found attested in any English-language context. 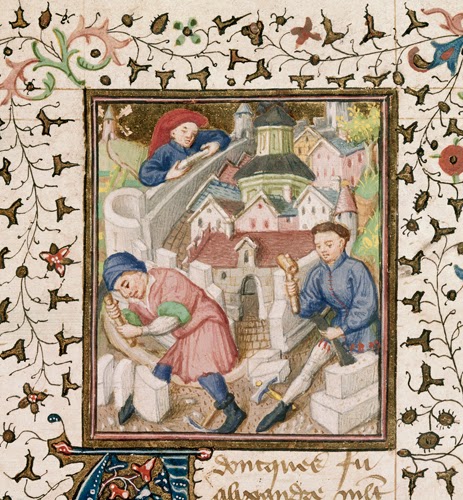 (BL, Royal 20 B.XX, fol. 21)
Briefly returning to the sense of the word, penthouse, with its implications of wealth and luxury, seems to have moved away considerably from what it was in medieval times, and defining the word in the AND as ‘penthouse’ may be rather misleading. A pentis seems to have referred to any kind of structure appended to the wall of another building, and the evidence suggests that this structure may have been anything from a covered walkway, projecting porch, or shelter to a shed, annex or outhouse.[6]
Et qe les pentyz et getiz des measouns soient autresi hautz qe gentz as chivalx puissent par desouthe chivacher      - Lib Alb 271
(‘And that the ‘pentyz’ and jutties/projecting parts of the houses must be high enough for people on horseback to be able to pass underneath’)
In this case, the pentyz are structures appended to the wall of a building (in the form of a shelter, extended eaves or a sloping roof) possibly in order to provide a covered area or gangway between buildings. They may have been full extensions of the entire upper floor creating a covered gallery underneath, or they may have formed simply a porch or shelter above the door, as is suggested by the vernacular gloss found to porticus in a manuscript of Adam of Petit Pont’s Latin De Utensilibus: ‘gallice pentise vel porche’ (TLL ii 61). 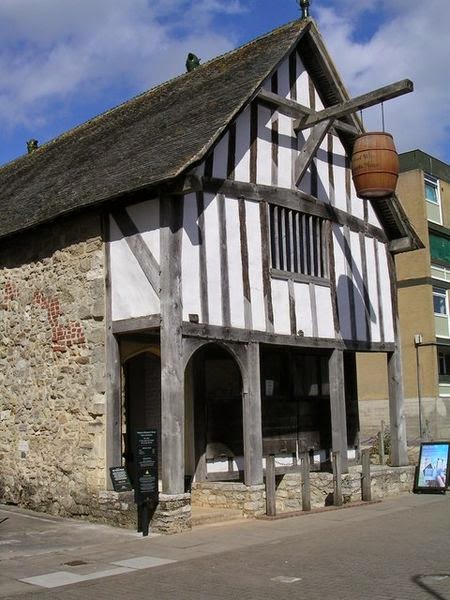 two wooden planks can have been barely sufficient for more than a simple covering for a door or a window. 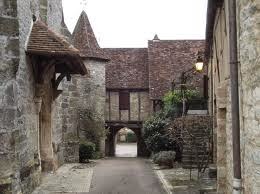 (Loubressac, France)
In contrast, in an indenture from 1321, detailing the masonry works to build a hall in Hamsey (Sussex), the word seems to refer to part of a much more elaborate structure:

Here the word ‘pentis’ refers to at least the roof of a proper annexe or building attached to wall of another one but also having its own supporting wall. 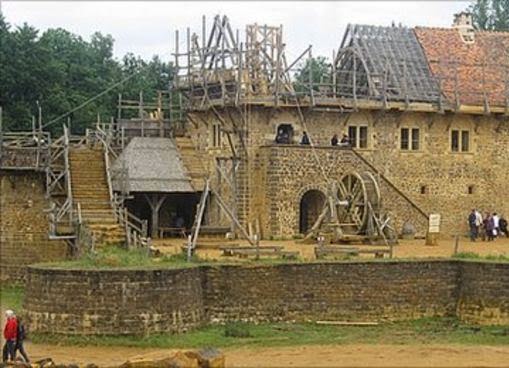 (Château de Guedelon (France) - modern reconstruction of a medieval castle)
Finally, in the aforementioned John of Gaunt attestation, no other buildings or walls are mentioned, suggesting that the ‘pentthous’ belonging to a fishery may have been small independent shelters or outbuildings used by fishermen.
In conclusion, in Anglo-Norman, a pentis or penthouse could have been anything from a small shelter or covering to an elaborate extension. So anyone thinking of buying an Anglo-Norman house ‘with penthouse’ (these adverts seem to appear on the internet from time to time) would be strongly advised to go and check this feature out before making any purchase.

[1] Together with ‘(?) book cover’. The modern senses of ‘an addition to a document or book’ or the anatomical ‘extension of the large intestine’ are post-medieval, cf. OED appendix n..
[2] Remarkably, English does not have the pre-fixed form, with only one attestation of appentice found in an English text from 1600, cf. OED appentice n..
[3] Its earliest attestation is the word appearing in the name Willelmus de la Pentic’ (from the Close Rolls of Henry III), which looks suspiciously Anglo-Norman. Other early examples show the vernacular word in a Latin context, and may equally be interpreted as Anglo-Norman.
[4] Of course, the first half (pent) may have retained its association with Latin pendere, as the sense ‘to hang from’ may be equally relevant.
[5] In the AND hous can be a variant spelling of houce1 (‘holly’) or the plural of houe1 (‘hoe’). Furthermore, A-N house can be found in the entries hose1 (‘hose, leggings’), huce1 (‘tabard, mantle’) and us2 (‘door, gate’). None of these entries/senses are relevant for the present word.
[6] Another (purely military) sense of penthouse as ‘a makeshift portable shelter formed of soldiers’ shields above their heads’ is post-medieval, attested, according to the OED, from 1600.
[7] For the many possible senses of this word, see AND ostel.