Word of the Month: The Anglo-Norman Horse (part 1)

By Anglo-Norman Dictionary July 30, 2015
A term that may be familiar to the casual Googler of 'Anglo-Norman' as much as to professional horse-breeders is 'the Anglo-Norman Horse'. Historians may point out that this particular breed was one of the main saddle-horses used by the French cavalry in the second half of the nineteenth century. Sports lovers might know it as a former show jumping horse or a nineteenth-century trotting racer. In the second half of the twentieth century the breed was abandoned and combined with other types in the Selle Français - France's national saddle horse breed. However, in recent decades attempts have been made to re-instate the Anglo-Norman as a separate breed once more. 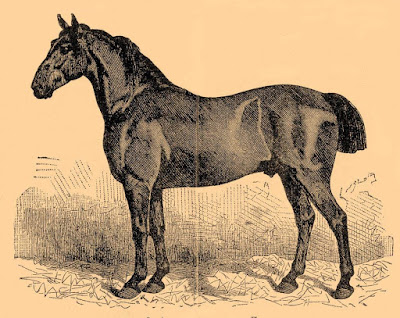 It is perhaps only the Anglo-Norman linguist who might be confused in thinking that this is an ancient breed, dating back to medieval times and the Norman invasion. Was the cavalry of William the Conqueror as we see it on the Bayeux tapestry made up of ‘Anglo-Norman horses’? The answer is a resounding: Absolutely not! Upon closer inspection, it turns out that the ‘Anglo-Norman’ is a hybrid breed that was developed only in the early nineteenth century in Lower Normandy (France), simply by crossing the native Norman horses with the English Thoroughbred.[1] It is a sense of anglo-norman has not been incorporated in the OED entry Anglo-Norman a. and n. (Third edition, 2008 - 7596) but is listed in the TLF entry anglo-normand: ‘Cheval obtenu par le croisement du pur sang anglais et du cheval normand’. 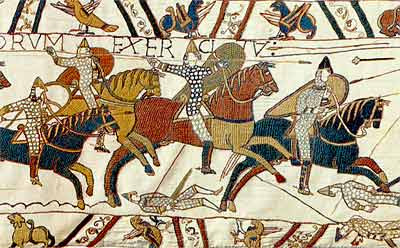 Leaving this red herring of the nineteenth-century Anglo-Norman horse aside, it is worth having a closer look at the richness of vocabulary that Anglo-Norman, as a medieval language, did have when it came to horses. The horse was an animal that was often essential in many parts of medieval society, with plenty of references found in Romance literature, agricultural instruction books, hunting treatises and many other sources.

As mentioned before, it is now possible to search the Anglo-Norman Dictionary by semantic tags (currently only an in-house option, though set to become available to the wider public at some point in 2016 - for more information on this, see the earlier WoM entry on Anglo-Norman chess terminology), so that it has become more straightforward to retrieve all Anglo-Norman equine terminology.

With over 100 entries tagged as horse-related, this blogpost will just look at a selection.

To begin with, the main Anglo-Norman word for horse, as in continental French, is cheval, used with sometimes interesting variant spellings such as chivaule, chuval or kaval. For plural forms, aside from the regular chevaux, Anglo-Norman also yielded chevals together with more outrageous spellings such as chewaws, chivex,  cavaus or chivachx. The term is common in romance languages and derives from Latin caballus[2] ('horse'). 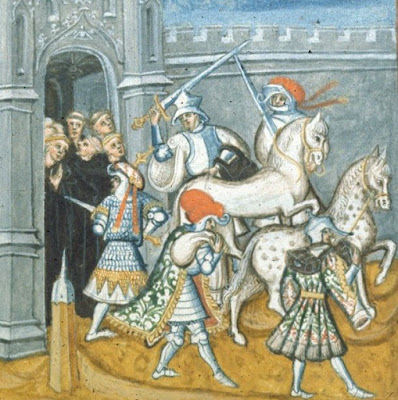 In contrast, the common Classical Latin word for horse, equus[3], did not produce a vernacular form in Anglo-Norman (or Middle French, for that matter). It appears only as a rare adjectival form, equin, from Latin equinus[4]:

The Germanic alternative hors (see OED horse n.) is also absent from Anglo-Norman,[5] but the AND lists a number of compounds, all clearly Middle English in origin but used in an Anglo-Norman context, that retain the Germanic word: horsehouse (‘a horsecloth’), horsehove (the plant ‘coltsfoot’), horsmaunger (‘manger’), horsmete (‘horsemeat (?)’, horssecoller (‘horse-collar’), and fischehors (‘horse used by fishermen’).

Returning to the most common word, cheval, the composite expressions and derivatives illustrate the different uses to which medieval horses were put. Firstly, cheval d’armes or cheval de guerre are two terms for (armored) battle-horses:

de tous chevaus des gens d’armes horsmis chevaus de kariage Treaty Rolls ii 4.14
(‘of all the horses of the soldiers, except for packhorses’)

The adjective maler derives from the Frankish word *malha[6] (malle in Middle French and male1 in Anglo-Norman), meaning ‘leather bag’. In Anglo-Norman the word is also used as a noun in Gaunt’s records, specifically to refer to a packhorse: ‘facez paier [...] pur un maler de nostre chambre’ (GAUNT2 ii 242). 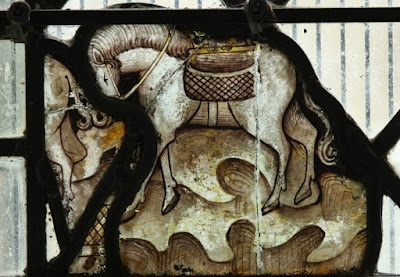 A cheval de charette is used with the sense of cart-horse, attested as a vernacular gloss to the Latin word veredarium (TLL ii 73).[7]

In addition to these, the AND entry also includes interesting compounds such as cheval de mer (‘horse of the sea’, meaning ‘hippopotamus’), cheval de fust (an 'instrument of torture', presumably shaped like a wooden horse) and ungle de cheval (the plants ‘coltsfoot’ or ‘water-lily’).

The term cheval also produced a large word-family of derivations: chevalcher, enchevacher and (less frequently) chevaler2 are the verbs for riding a horse, while the person who does so is called a chevalchant, chevalcheur, echivachure (an unetymological and possibly erroneous form), or, most frequently chevaler1. The latter word widened it sense from ‘mounted soldier’ to ‘knight’ in general, and went on to produce a separate group of frequently used words – chevalerie, chevalerus, etc. – related to knighthood[8]. For unhorsing, Anglo-Norman has the prefixed verb deschevalcher, while entrechevaucher is a somewhat peculiar intransitive verb that means ‘to ride on horseback in the middle of a troop’. A troop of horses, which in a military sense became a 'cavalry', was called a chevalchee (also used for a procession, the service of escorting a feudal lord or a perambulation of the borders of one’s land – all on horseback), chevalcherie (a rare word, probably under the influence of the abovementioned chevalerie), and, exceptionally, chevalchement. Chevalchure is a noun used for horse-riding, but also referred to the right to possess a horse, or even the horse itself:

The only adjectival derivation, chevalin, meaning ‘horse-like’, is rare (‘.iij. bestes chivalaynes’ Charboclois 350). Finally, a diminutive noun, chevalrette, was used for a figurine or statue of a horse: 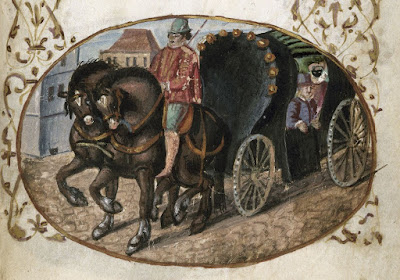 While cheval is by far the most common word for ‘horse’, Anglo-Norman also has a great number of, usually more specific, alternative terms.

The words used for ‘stallion’ are estalon (from Frankish *stallo[9]) or, with the typical loss of the French initial ‘e’, stalun, and the rare gareignun (from Frankish *wrainjo[10]). A stallion kept specifically for breeding (in a haras or stud-farm) was called estot (or sometimes stot), a word – obviously the same as stud n.2 and deriving from Old English stód – not found in Continental French.

In contrast, female horses and the young of the horses are referred to using vocabulary that is Latin in origin: a ‘mare’ is called ive1 (from equa[11], with the ‘qu’ assimilated to a ‘w’ or ‘v’ sound) or jument (from jumentum[12]), whereas the words for ‘foal’ are poutrel (from pulliter[13]) or pulein1 (from pullus, through its derivation pullanus[14]). 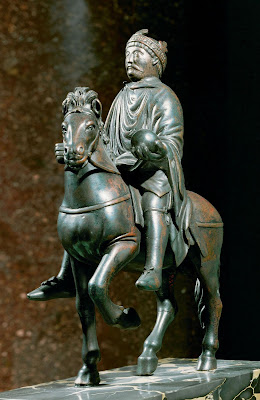 Among the names for small riding horses (often for women) Anglo-Norman has hakeney[15] (which the FEW considers English or Germanic in origin[16], but which is well attested in Continental French as well, cf. DMF haquenée and haquenet), palefrei (from Latin paraveredus[17]), and sambuer (from sambue, a saddle specifically for women, which derives from Latin sambuca, originally meaning ‘harp’ but transferred to a variety of harp-shaped objects[18]).

A large war-horse or charger is called a destrer1 (from Latin dexter[19], i.e. ‘right’; according to the FEW from the expression equus dextrarius, i.e. a horse that is led by the squire using his right hand - an unexpected etymology that is repeated by the OED sub destrer n.).

Another word for pack-horse or draught-horse is affre1, with variant spellings such as aver, havere or even vere. The term was also used more generally for all draught-animals or even livestock. It is related to the verb aver2: ‘to have, own, possess’, and as such derives from Latin habere[20], the idea being that the domestic animals are the ‘stock’ or ‘possession’ that belong to a farm.

Finally, a grand and valuable horse is sometimes called a milsoudur in chanson de geste. In other words, the horse was referred to rather boastfully by its hypothetical price-tag of ‘a thousand shillings’. 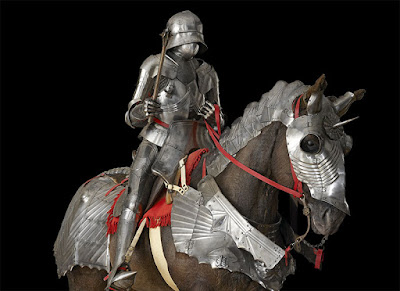 This is certainly not a complete overview of all Anglo-Norman words for horses. Perhaps in a next blogpost, we hope to return to the subject and discuss horse-names based on their place or origin (e.g. arabi), the colour of their coat (e.g. baiard1), the manner of their breeding (e.g. bastard), etc.