A genuine Anglo-Norman conversation between travellers sorting out their accommodation for the night? Or is this a polite exchange between two itinerant knights, excerpted from some epic romance? Perhaps, the setting of the scene for a fabliaux?  Then again, the somewhat contrived nature of this innocuous dialogue may have a different ring of familiarity, especially for those accustomed to the type of ‘could you tell me the way to the station’ scenarios featured in numerous language teaching courses. And this is precisely what this is: one of the many examples or model dialogues, excerpted from an Anglo-Norman phrase-book – or manière de langage – that was compiled around 1415 by the Oxford scholar William of Kingsmill, with the specific purpose of teaching French in England. 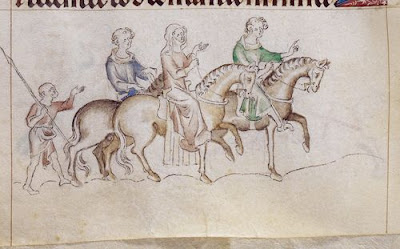 To briefly put this phrase book into context, the turn of the fifteenth century in England saw a growing effort in producing didactic manuals on how to learn French correctly. The precise nature and development of four centuries of Anglo-Norman language acquisition in England remains a subject that needs further investigation,[1] but we do get some insights from the great number and variety of instruction materials that have survived, especially from the later period. Walter of Bibbesworth’s Tretiz de language,[2] although by the 15th century more than 150 years old, continued to circulate, and became incorporated into Femina[3] in the first quarter of the fifteenth century. This influential treatise in verse discusses correct (and often complex) Anglo-Norman vocabulary, with special attention to homonyms, and provides Middle English translations for certain words:

Ouwe jaungle, jars (gandre) agroile
Ane (enede) en mareis jaroile (quekez).
Mes il i ad jaroil (quekine) e garoile (trappe),
La difference dire vous voile:
Li ane jaroile en rivere
Si hom de falcoun la quere,
Mes devant un vile en guere,
Afichom le garoil en tere
(bibb roth (G) 261-68)
(A goose gaggles, a gander gabbles / A duck quacks in a marsh. / But there is ‘quacking’ and there is ‘palisade’, / And I want to tell you the difference: / The duck quacks in a river / When someone hunts it with a falcon / But in front of a city at war / We plant a palisade in the ground) 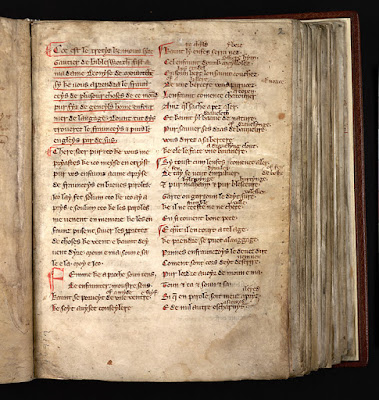 From the same period we get numerous Nominalia or thematic glossaries which place Anglo-Norman words alongside their translations in Middle English, Latin or even both:[4]

Just as popular were different versions of the Ars Dictaminis, ascribed to Thomas Sampson,[5] which provided models for various types of letter writing – including many instances of university students writing to their parents they have run out of finances:

[...] mez veraiment, pur mez despensez money defaile, pur quel enchesone vous en pry de entieriez de moun coer que pur solas de ma exhibicion queconque quantité de money pur cest present terme a suffire, come y pleist a vostre volunté, vous me vuillez envoier [...]
(samps1 422)
([...] but truly, because of my expenses I’m short of money, for which reason I beg you, with all my heart, to please send me, for the relief of my allowance, any quantity of money that would be agreeable to you to suffice me for the present term [...])

We see orthographical manuals[6] appearing and, in the first quarter of the fifteenth century, Anglo-Norman grammars (or Libri Donati, named after the Roman grammarian Aelius Donatus):[7]

Finally, we have the aforementioned model dialogues in Anglo-Norman, grouped together by Andres Kristol under the term manières de langage in his edition of the three main such texts.[8]

Written between 1396 and 1415, these compilations teach Anglo-Norman through phrases (e.g. ‘Sire, voulez vous manger ové nous?’ (‘Sir, do you want to dine with us?’) (69.21), ‘Sire, bone noet vous doyne Dieu et boun repos’ (Sir, may God give you a good night and much rest’) (69.29), or ‘Sire, quelez novelx de par dela?’ (‘Sir, any news from over there?’) (70.5)) and by practical examples from real-life situations (hiring a clerk, comforting a child, visiting a sick friend, asking for the time, etc.). Their purpose, as stated in the introduction of the earliest Manière, is

d’apprendre a parlere, bien sonere et parfitement escriere douce francés, q’est la plus beale et la plus gracious langage [...]. Quare Dieux le fist si douce et amyable princypalment au l’onore et louange de lui mesmes (3.8-13)
(to learn how to speak, pronounce well and correctly write sweet French, which is the most beautiful and graceful language [...] Because God made it so sweet and friendly, primarily to His own honour and praise)

This richness of didactic materials gives us some interesting indications of the state of Anglo-Norman around 1400. Firstly, it confirms that Anglo-Norman is by now seen not so much as a native tongue, but more as a language needing instruction and schooling: children learn it from their teacher, travellers consult their phrase-book, and Middle English glosses or translations explain senses. It seems that any association of the language with Continental French is seen as preferable, with the English ecclesiastical author of the earliest Manière proud to point out that his French is ‘sicomme j’ai entendu et appris es parties dela le mer’ (‘as I have heard it and learned it across the water’) (45.17). The reader is perhaps reminded of Chaucer’s Prioress, whose French, a century earlier, is described, perhaps with a hint of disapproval, in the Prologue of the Canterbury Tales as ‘After the scole of Stratford atte Bower’ (l.125) rather than learned at Paris.[9] 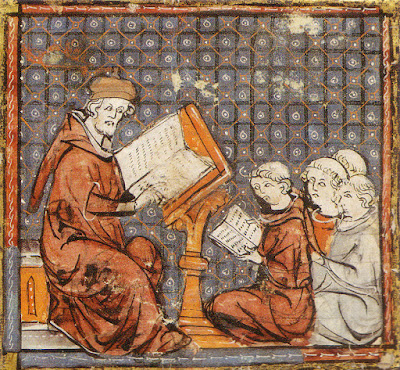 At the same time, however, the awareness of the insular identity of the language remains strong: the 1415 Manière often preserves a ‘typical’ Anglo-Norman spelling (for example, the use of the -aun- graphy in avaunce or plaunte) to the extent that Kristol believes that the language is deliberately conservative (p. xlv), and uses a French that is marked by English vocabulary, phrases and semantics (for example, the verb travailler in the sense of ‘to travel’ instead of ‘to work’ (733.9) or the use of laisser instead of faire in an expression like ‘lessez vostre garçoun venir’ (74.18)).

Secondly, and almost contradictory, these texts demonstrate the continuing strength of Anglo-Norman in early fifteenth-century England: they confirm the need to speak French in society, and describe a whole range of social circumstances in which this language seems to be presented as the norm – not just as the language of high society, law or international trade, but also as the commune parlance of the English market place, at inns, or even between a baker and his apprentice or labourers on the field. However fanciful some of these different scenes may be, they employ a type of Anglo-Norman that is often vibrant and that, we may assume, attempts to be a representation of what must have been everyday usage. Reading through Kristol’s edition, we inevitably get a feeling that this is a tranche de vie of Anglo-Norman as an animated, down to earth and colourful language – very different from the register of romances or religious edification. Among other things, these Manières provide ample examples of how to curse or insult someone, sounding, at times, surprisingly modern: ‘Alez decy, senglent fiz de putaigne’ (54.29), or ‘Ribaud, vous baserez mon cuel’ (54.32). So much for French as ‘la plus beale et la plus gracious langage’ (3.9-10). 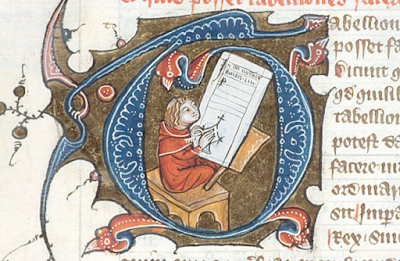 The three Manières are similar in contents, and one of the recurring scenarios is how to use Anglo-Norman in the medieval inn: from how to order food and drink, to how to ask for a room for the night, how to ask for the bill, and how to chit-chat with the wife of the landlord. To return to our two aforementioned travellers, who were arriving in Oxford:

[...] puis il vient a un hostel et dist ainsi:
– Hostiler, hostiler!
Et l’autre lui respount a darrains tout dedeignousement ainsi:
– Qu’est la?
– Amys!
Donques vient l’ostiler et overt la port et dist:
– Hé, Janyn, estez vous la?
– Oil dea, ne me poes tu veier? Quoi ne m’as tu, paillart, respondu a la primer parole que je t’appelloi?
[...]
– Hé, beau sir, ne vous coruscé point, quar vraiment se j’eusse scieu que vous eussez esté ci, je vous eusse venu a primer foiz que vous hurtastez a port
(9.27-32 and 10.1-13)
([...] then he arrives at an inn and says thus: ‘Landlord, landlord’. And the other eventually answers him in an arrogant manner, like this: ‘Who’s there?’ – ‘A friend!’ Then the landlord comes, and opens the door and says ‘Hey Mister, are you there?’ – ‘Yes, of course. Can’t you see me? Why on earth, you villain, didn’t you answer me first time I called you?’ [...] – ‘Hey, dear Sir, don’t get upset; because, really, had I known that you were out here, I would have come to you from the first time you knocked on the door’) 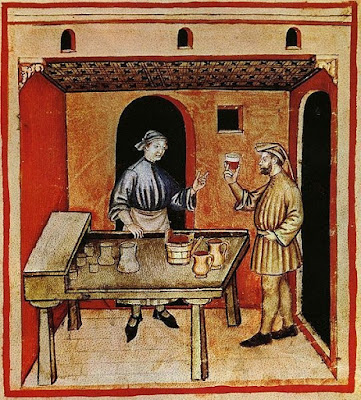 – Ore, beele dame, qu’avrens a souper?
– Sire, vous averez a soper viande assez; mez ditez a moy si vous vuillez avoir vostre viande apparaillé cyeins ou a le kewes?
– Nonil, dame, en vostre cusyne demesne.
(73.17-20)
(‘Well, lovely lady, what will we have for supper?’ – ‘Sir, you will have plenty of food for supper; but tell me whether you want to have your meal prepared here or at the cook’s place?’ – ‘No no, madam, in your own kitchen’)

– Hostiller!
– Syre?
– Baillez cea de jettours et lessoms compter combien nous avons a la chambre et combien a l’estable
(75.6-9)
(‘Landlord!’ – ‘Sir?’ – ‘Get out your counters, and let’s work out how much we owe for the room and how much for the stable’) 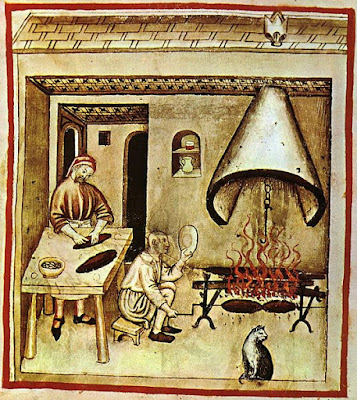 All together, these Manières de Langage, a rich and at times amusing source of everyday Anglo-Norman conversation, constitute a crucial linguistic text base for the Anglo-Norman Dictionary, and it is no surprise that they are currently cited more than 800 times from A to Z.